A little girl, every woman dreams about how her prince will come someday on a white horse and gave her love and happiness. Of course every prince is the epitome of a true man – handsome, strong, intelligent and unique.

What is a real man … or prince from fairy tales for his beloved?

10 things that make a man’s true for every woman.

1. A real man has to be strong – he does not cry, does not complain, does not get sick and do not run to the doctor every time you sneeze. A real man is macho, it does not show unnecessary emotions. It is the backbone of his family and no time to be weak.

2. A real man must be purposeful – a real man knows what something is important and what is not. There is a plan and pursue its tasks.

A real man is not sasreodotochen on sex, but on power, money and family.

3. A real man – it is most important family – he honors his ancestors and family traditions. He knows that his children are a gift of God and treat them as such, although there have from time to time to educate them a little more seriously.

4. A real man weighs his place – his word is law. Giving the word mean you should stick to it. If you can, just do not give a word. If you are a man, you must be prepared rather die than break a promise.

5. A real man strives to be a role model

Respecting yourself and others, taking the right decisions, you become an example for your children and all your subordinates in the office. Let people try to look like you copying your best traits.

Sinchetata rich dads who know only to spend other people’s money can not be real men. The man himself must earn his condition. May fail several times before they succeed, but we must try to end.

If you do start a business with the money of his father, he must multiply them at least 10 times to be called a real man.

7. A real man is a gentleman – besides gestures that a gentleman does for a lady it should be and that is the general in their daily lives.

8. A real man is honest in life – he never lies and never for nothing. Lying is for the weak men. A real man prices honesty and directness.

9. A real man should not be subservient to their egos – that’s the – hardest thing for a man. But if you still have too much ego and pride, it will not lead anywhere. Sometimes it’s better to be criticized. This does not mean that the world is falling apart, but must realize that not everyone accepts everything he does. This is a real man!

10. A real man is always dressed as a man – he does not go with women’s hairstyles, makeup and not epilation chest. A real man has at least three expensive suit and an official at least three days a week. He should know how to tie his tie alone.

That is the truth about the real man … the dream of any real woman!

Previous Lamb with spinach
Next Self-medication with paracetamol is extremely dangerous!!!

Money and career of the man 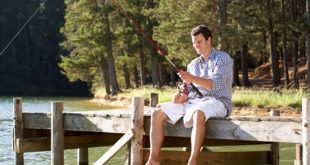 Hobby for men – barrier against stress

Men’s Hairstyles – an important part of the male ego